A couple of years ago we made our first trip to Ty Isaf. As we drove through the sublime Cambrian Mountains (Dr. Syntax would understand), with red kites wheeling overhead, the anticipation was palpable. We had recently bought our first painting of Clive’s, and we were on our way to collect it. “Hold”, “Hervé and the Wolf”, two titles, twice the allure. 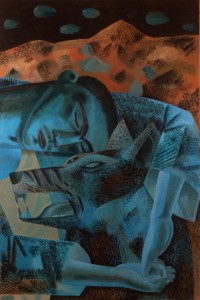 Inevitably sat-nav let us down in the last mile, and we foundered on the brink, knocking doors, searching vainly for the white house on the hill. At last we found the turn, drove down the narrow track, and met a car coming towards us. As our paths crossed we caught our first glimpse of Peter. He welcomed us like long-lost friends, though we’d never met. “Off to collect the vegetables … see you soon.” And away he went.

As we drove through the gate and approached the house our gaze was met with a perceptive but welcoming stare. There, on the window seat in the bay he sat. It was Jack, silent sentinel, bright of eye, salon savvy guardian of this place. Clive opened the door, but it was Jack who greeted us first; generously, enthusiastically, unreservedly.

When Peter returned, laden with fresh greens, we pulled on our boots and headed for the woods. First Clive and Maggie, then Peter and I, and then Jack, the mercurial shifter, leading, following, darting, catching, always delighting.

That evening the conversation ran freely, the fire burned brightly, our welcome to this most welcoming of homes was complete. My companion for much of the time was Jack. Snuggled close to me on the sofa, his warmth on my leg, I played subconsciously with the velvet nap of his ear. Kindest soul.

The following morning he joined us at breakfast, taking his place assuredly behind one, then another of us, on our chairs.

As a parting gift that day Maggie gave Clive and Peter a diminutive felted figure of Jack she had made. Having met him now it seemed to have caught his glorious joie de vivre.

A year or so later we returned to Ty Isaf; another trip, another painting. On our first visit we had been seduced by a stunning painting in Clive and Peter’s own collection. There it hung on the first-floor landing, “The Rapture” a glorious interpretation of the story of Tobias and the Angel. It was beyond the scale of anything we had bought before, but oh what a picture. I am eternally grateful for Clive’s generosity in letting us take it home; I know how much it meant to him. 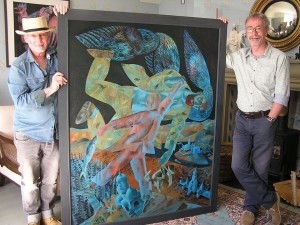 But we had devious deeds to do that day too. Unbeknown to Maggie I had bought her another painting, which was to be her Christmas present. But how to smuggle it into the van without her knowing? Jack was to be the lynchpin in this masquerade. Whilst he and Clive masterfully diverted Maggie’s attention, Peter and I slipped out of the rear door and squirreled-away the offending picture in the van. The subterfuge worked like a dream.

So why do I write this, so long after the event?

Dear Jack left us yesterday. Left Clive and Peter with an unfathomable loss, yet hearts brim-full of love and joy.

When guests come to stay with us they wake each morning to The Rapture. It fills the wall with its sensuous colour, its vivid symbolism, its gloriously skewed landscapes, and at its heart the most tender of portraits … dear Jack. 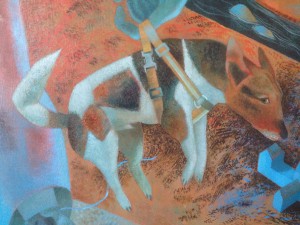 I look upon this little soul every day, and as I recall that soft velvet nap between finger and thumb, I cannot help but smile.